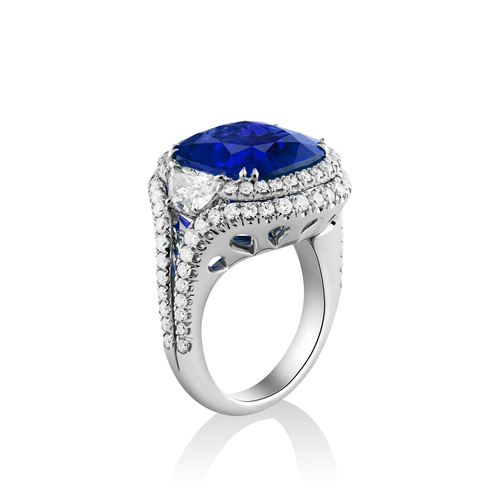 Engagement ring styles are important as it is a jewelry piece that you will be wearing for the rest of your life. Similar to wedding dresses, there are multitudes of designs and many would like theirs to be of unique design. The degree of customisation that you can bring into a diamond engagement ring begins with the cut of centre stone, the ring setting, the band material and finer details such as engravings. The popular choice for ring designs has varied over years and each decade has its own choice of signature look. Listed below are the popular designs from the first half of 20th century.

The Edwardian vintage ring design was the popular choice in the 1915’s and they carried forward the design aesthetics from the Victorian era. The prominent feature of this design is the accentuation of beauty with lace like filigree in the ring setting that featured motifs like hearts, hands symbolising love and unity. The desired choice of metal for diamond ring bands is platinum.

The prominence of art deco movement in the 1920’s made its way into the design aesthetic of diamond engagement rings as well. Their characteristic feature is the use of geometric shapes, sharp lines and the use of multiple smaller stones rather than a big centre stone. These art deco inspired diamond rings are some of the most sought-after vintage designs and popular even today. Towards 1935 the ring designs simplified to a degree with the use of a large centre stone even though the trend of art deco inspired designs continued.

The 1945’s showed the shift in diamond engagement ring design towards floral inspired designs with more focus on a larger solitary centre stone than multiple smaller stones. Besides, the metal choice shifted to yellow or rose gold as platinum became scarce due to World War II. It was during this time that diamond rings became a default choice for engagement and wedding rings with the catchphrase “diamonds are forever”.

By the 1950’s diamonds became more accessible, the most popular and enduring design choice from this period was the large centre stone with smaller side stones or baguettes on either side of it. Also, the rings featured braid or engraving details on the diamond ring settings enhancing their timeless appeal.

In 1965, classic style engagement rings were popular, carrying forward the trend from the 1950’s. Besides, the use of colored gemstones in engagement or wedding rings became more widely accepted due to their use by Hollywood stars.

So, the popular engagement ring styles of the present are vastly different from the past and they featured more intricate finer designs.